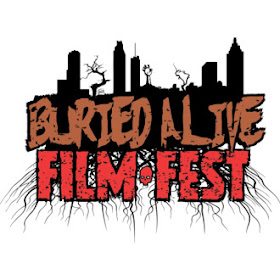 Every November in Atlanta, Georgia, Halloween gets extended a few extra weeks, and we all have an excuse to continue watching horror movies a bit longer before diving into the holiday season. That's all thanks to the Buried Alive Film Festival, the long running festival that brings great horror films of all kinds to our doorstep each year. This year had one of the best lineups of feature films, and we got a chance to see all eight of them!

Antrum: The Deadliest Film Ever Made
dir. by David Amito and Michael Laicini

The festival opened with the highly anticipated movie that has been said to have killed over 60 people. Well, at least that's what the marketing department says. The mockumentary aspect of Antrum is clever and at times genuinely creepy, but 85% of the movie is the full film-within-the-film, which doesn't live up to the hype. Full Review Here.

I never knew I needed an Expendables-style roundup of aging B-movie actors beating the ever-loving shit out of a bunch of drugged out punks, but here we are. Stephen Lang, Fred Williamson, and William Sadler (to name a few) star as veterans whose VFW outpost is besieged by "mutant punks" in a violent not-too-distant future. This movie plays like a cross between Robocop and Assault on Precinct 13, and is exactly as badass and fun as that sounds. Although it's shot very, very dark (perhaps to make the action more convincing), the synth-heavy music, gritty look, and most of all the performances really sell it.

Although this apparently had a small release last year, this was the first I'd heard of this nightmarish throwback to motorcycle movies. Hellbound is impressively dedicated to its look and feel, and if you didn't know better you might really think this was made in the early '70s, from the fact that it was really shot on 16mm to the acting, the sound and music to the trippy kaleidoscopic effects. Despite the very bare bones story (two bikers and one of their girlfriends are on a motorcycle trip, but get caught up in the rituals of a coven of sexy witches), I found myself really engaged and thoroughly enjoying the movie. This is a return to a very specific kind of movie that really delivers, and I'm really excited to see what Winston comes up with next!


The Wretched
dir. by Brett Pierce and Drew T. Pierce

Ben (John-Paul Howard) is living with his dad for the Summer, but his vacation is ruined by his suspicions that the woman next door has been taken over by an ancient witch. The Wretched is unique in the bits of mythology it uses, and this is a genuinely frightening version of a witch story. This polished and clever take on a witch invading a peaceful residential area is a must see! Full Review Here.


Those Who Deserve to Die
dir. by Bret Wood

A veteran (Joe Sykes) who is the only survivor of his platoon has returned home, but is getting brutal revenge on people for a reason we are not initially privy to. He is goaded into these heinous acts by his creepy little sister (Alice Lewis). There's more to it than that, but to say much more is to spoil the clever twists and turns that the film makes. This one uses some of the tropes of the black gloved gialli killer with mysterious motives, and utilizes some interesting imagery and sound design to tell its tale. I'd be remiss if I didn't mention the kickass music that lends a sense of bloody grace to the movie. A complex and unique movie that is worth checking out.


J.R. “Bob” Dobbs and the Church of the Subgenius
dir. by Sandy K. Boon

This fantastic documentary recounts the origins of the Church of the Subgenius, a cult (or a big joke) created by two men in Texas in the early 1980s. The subject matter is really intriguing, especially when it begins to show how the gag started to get out of hand, and how the subculture of weirdos and outcasts in many ways led to the current political situation. More than that, though, the film itself is really entertaining, and its use of home videos, animation, and lots of public domain film make it fit its subject matter absolutely perfectly. An informative but wild ride! 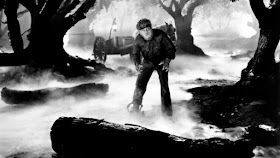 Mark of the Beast: The Legacy of the Universal Werewolf
dir. by Daniel Griffith

Often documentaries about movies tend to be, well, boring, especially if you aren't familiar with most of the movies the talking heads are discussing, but Mark of the Beast is not that movie. This documentary which chronicles the history of werewolves in cinema is a fascinating look at how monster mythos is born and how it evolves over time. They cover all the greats (the full Wolfman series, the Hammer film, American Werewolf, etc.), with some really interesting interviews with the likes of John Landis, David Naughton, Mick Garris, and loads of special effects artists. This is a highly produced and highly recommended documentary for anyone even mildly interested in werewolves or monster movies in general.


That's it for this year, but we'll see you again in 2020 for more terrifying, weird, and awesome movies!
Harper W. Harris at 10:03 AM
Share